Gone too Soon: Songs of Love, Life and Loss CD 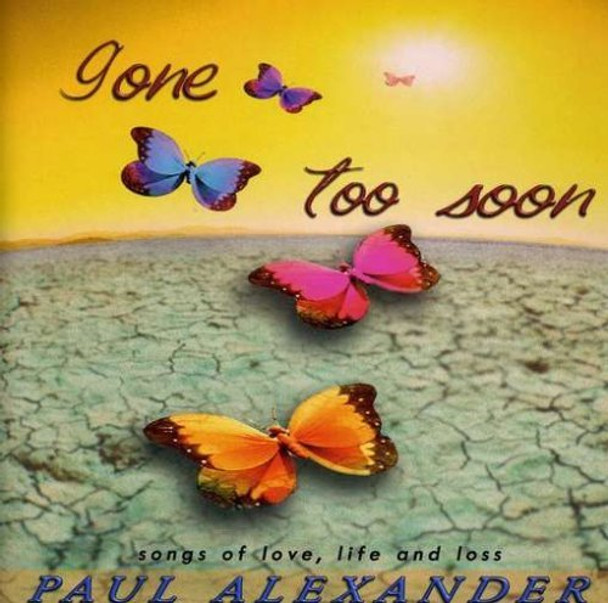 Gone too Soon: Songs of Love, Life and Loss CD

Paul Alexander is a singer, songwriter, psychotherapist, author, actor and performing artist who has shared his music and message of hope throughout the United States and Canada.

His recordings are resource tools being utilized by Church Groups, Funeral Homes, Hospices, and Hospitals as well as bereavement support groups and individual caregivers. Paul's contemporary style combined with his compassionate lyrics and compelling vocal delivery touch the heart and soul of the listener and provide healing and upliftment.

Paul's music has been inspired and enriched through his work as a Psychotherapist and Hospice Social Worker.

These songs of love, life and loss were carefully chosen not only to accompany memorial services and support groups but also to uplift and inspire. Each song is a gem that captures the heart and soul of grief as well as the true meaning of life. Gone Too Soon, the title song, was originally written for a TV broadcast to pay tribute to performers who had died. It was used for tributes to Princess Diana and has won an Emmy and was recorded by Michael Jackson.

Paul Alexander recorded this song with the musical writer Larry Grossman, who accompanied Paul with a piano on this very special arrangement.  In addition to the title song, Mama A Rainbow and Dance with My Father celebrates and honors our parents. I Hope You Dance and Live Like You Were Dying shine on as words of wisdom with unique vocal performances by Paul. For Good from the musical Wicked and To Where You Are are heart-stirring performances that will bring healing to your spirit.

Chicken Soup for the Grieving Soul: Stories about Life, Death and Overcoming the Loss of a Loved One

MSRP:
Now: $16.95
Was:
Chicken Soup for the Grieving Soul:  Stories about Life, Death and Overcoming the Loss of a Loved One by #1 New York Times best-selling authors Jack Canfield and Mark Victor HansenThis...

Too Soon A Memory: A Guide for Parents Suffering a Miscarriage

MSRP:
Now: $5.95
Was:
Too Soon A Memory: A Guide for Parents Suffering a Miscarriage Gives practical information for a couple facing grief following a miscarriage.Written in the style of When Hello Means Goodbye, this...

Rare Bird: A Memoir of Loss and Love

Life Resumed: After a Catastrophic Event or Other Loss

MSRP:
Now: $17.95
Was:
I highly recommend Life Resumed (it) covers a wide range of losses and provides a realistic approach to recovery. I approached it both as a clinician and as someone who has had many...

MSRP:
Now: $15.00
Was: $20.00
The Butterfly Song Gift Book & CD By Paul Alexander  --  padded hardcover Butterflies are messengers of joy and life. This song is perfect to enhance BUTTERFLY RELEASE...

MSRP:
Now: $10.00
Was: $14.95
* ON SALE - WHILE SUPPLIES LAST * A Quiet Place invites the listener to seek the quiet within and rest in a safe place away from the turmoil and rush. Whether as soft background music or as a guide...

MSRP:
Now: $5.00
Was: $19.95
* on sale - while supplies last * Lucy Lets Go is a resource that creates age-appropriate dialogue for young children to discuss dying and death through an interactive storybook. Lucy is just a puppy...

MSRP:
Now: $3.25
Was:
Building Memories: Planning a Meaningful Cremation Funeral These planners provide wonderful comfort and guidance from Doug as he explains the healing value of a funeral, the importance of...

MSRP:
Now: $5.00
Was:
After the Storm A Healing Book and Workbook for Children and Adults Whose Lives Have Been Affected by Severe Weather. This is your book. You can draw in it, you can write in it, you can tear pages...

MSRP:
Now: $85.00
Was:
This bag is filled with our Centering published resources for Bereaved Parents. 22 titles!!! Over $135 total value!! Includes: Love and Remembrance; I Remember, I Remember; Holiday Blues; Children...

MSRP:
Now: $16.00
Was:
This care package is for anyone who has a loved one die. It includes a book tote and books that are easy-to-read for the newly bereaved. Care packages can be customized with other resources. It...

MSRP:
Now: $9.95
Was:
Preparing the Children: Information and Ideas for Families Facing Serious Illness & Death It’s difficult to know how to prepare for a journey of serious illness.  The fear of death...

MSRP:
Now: $15.00
Was:
My Grief Rights Wallet Cards These colorful wallet cards help grieving kids understand their feelings and empowers them to mourn in healthy ways. A compassionate gift for any bereaved children old...