In a previous Grief Digest article, a new concept specific to child loss was discussed (Grief’s Ladder). This concept evolved from decades-long journaling about the loss of our 17-year-old son, Andy, in a car accident in 1997. Although this model is fully explored in my Amazon memoir, Grief’s Ladder: A Son’s Death and a Father’s Healing Promise, this follow-up article will provide greater detail about the top two rungs of Grief’s Ladder, shown below. 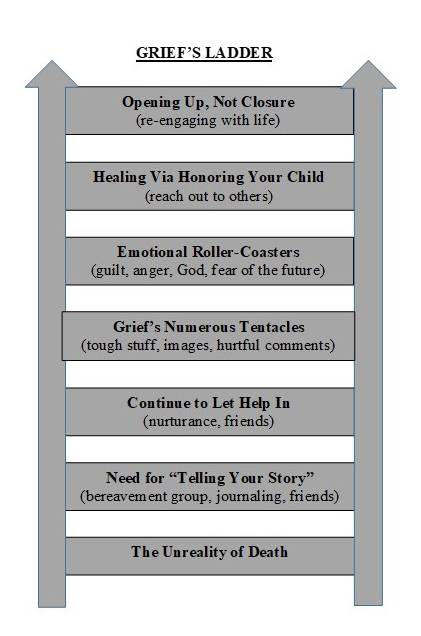 To provide some context I must first backtrack a bit. Since publishing the memoir I’ve had so many misgivings that I was perhaps too realistic in telling how difficult child loss is to deal with. Should I have left out whole chapters on my grief journey and focused more on what is, eventually, the hopeful message of the memoir? If the sole purpose was to sell books by making this an inspirational memoir, then focusing more on recovery and less on grief might have been the best decision. But child loss is devastatingly difficult, and emerging whole on the other side of grief is no easy road. One can’t minimize or sugar-coat the grief associated with child loss. Experience from my years with a child-loss bereavement group says grieving parents benefit from understanding they are not alone in the many difficulties they are dealing with.

My focus here on the top two rungs reflects the fact that Grief’s Ladder is really comprised of two larger pieces of a bereaved parent’s grief journey: the grief itself and figuring out how to rebuild a meaningful life that does not include their child. In those bottom five rungs, as you transition through grief, you often are dealing with questions directly related to “why did my child die?” When grasping those upper two rungs, you are providing reasons deeply personal to you as to “why did my child live?” It is here that I and so many others have found taking actions that honor the memory of our child allows us an on-going connection to the love that forever binds that child to us. For us, there is no “closure,” but rather personal healing via the actions we take to honor our child’s memory.

Crucial to my personal handling of grief was my silent promise to Andy, as I viewed his body in the emergency room, “to do some of the good you would have done had you lived longer.” That promise was crucial to my dealing early on with grief’s on-going assaults and then to maintaining my eventual long-term well-being. When a child dies, that life is left unfinished; our children’s deaths left us with their unfinished business. Who better than the parents to complete their child’s unfinished business? My promise to Andy to do some of the good he would have done brings purpose to both his life and mine.

But promises are often hard to keep. How did I, and so many others mentioned in the book, manage to do this? When you become an active participant in exploring and coming to terms with grief, you are in essence moving yourself along a path to healing, setting a foundation upon which you can firmly grasp those upper rungs. For my wife and I, the nurturance of Andy’s friends and the bereavement group provided early on an appreciation of the good that exists in this world, that our lives were not just filled with sorrow and dreadful events. When you start asking yourself “why did my child live” you provide a path that bypasses the quagmire of constantly focusing on “why did my child die.”

In occasionally reaching out to others to “do some of the good your child might have done” you find yourself taking new meaning from life. Bereavement meetings, grief research, journaling, speaking at Andy’s memorial soccer tournament, and winning a school board trustee position allowed me to occasionally grasp the “Healing Via Honoring Your Child” rung. You can’t continue to bury yourself in your own grief if your focus is outward. Thus, my experience and that of so many others is that this rung is initially forged in the fires of your sporadic efforts to honor your child while dealing with the grief-laden lower rungs of Grief’s Ladder. Perhaps there is truth in the wisdom that concludes “from suffering, to wisdom, to service.”

I personally know so many parents who in the aftermath of their loss made sporadic efforts to honor their child with actions not unlike what my wife and I did. As with most ladders you often are on more than one rung at a time. In essence, bereaved parents occasionally reach up to this rung for temporary solace inherent in actions honoring their child. But none of this is easy; each time you reach out in this manner you are literally torn apart because it is a direct reminder that you are doing this because your child has died.

Not surprisingly, all too often these sporadic efforts to honor your child’s memory remain just that, sporadic. The many rungs of child-loss grief are just so intense that they leave little energy for much else. Your initial attempts at honoring your child all too often lapse with time. Just getting through the months and years of grieving leave you exhausted. Once you are largely through your grief journey it is only natural to want to just take your mind elsewhere.

So why two upper rungs, and not just one? The need for two rungs simply reflects reality. As discussed, in the aftermath of a child’s death most of us want to honor them in some way, but find sustained efforts to be emotionally draining. This last rung of “Opening-Up, Not Closure” is a focus on re-engaging with life on a permanent basis. Losing a child truly leaves you a changed person. The many challenges of those bottom five rungs of grief often cause one to think about what is meaningful in your “new life.”

So how does one move from sporadic efforts to honoring your child (“Healing Via Honoring Your Child”) to a more permanent effort to make this a part of your DNA (“Opening Up, Not Closure”)? Research provides an interesting perspective. When most people think about what has shaped them, they don’t point to periods of happiness; instead, they point to some ordeal, some difficulty they had to overcome. A difficulty that not only transforms but hopefully also strengthens you. This is especially true of so many bereaved parents I personally know or have read about. I’ve known parents who have changed careers to the health field as a result of debilitating diseases that killed their children. Several began publicly speaking out on drug addiction as an illness, not a crime. Parents of children killed by gun violence are often in the news advocating common-sense gun law reform. It’s not as though I, my wife, and these other parents have gone out and completely transformed our lives in these directions. Indeed, these efforts are simply part of rewriting our internal DNA, making these efforts at honoring our children a way of making this world a little better place. In this process, some softening of our sorrow is lastingly achieved.

More than anything else I think I’ve come to understand that a significant life is one that has a positive impact on others. Many people, young and old, have had an impact on me, and I hope I’ve reciprocated to some degree. While I personally have only a limited ability to initiate change, excerpts from my journals can at least add my voice on issues of right and wrong, on social injustices that are so rife in the world. Perhaps foremost, I find myself with a heightened sensitivity to others. I’ve come to believe that the nature of our relationships with others most clearly delineates our character. Doing acts of kindness for others does your soul good; I simply can’t emphasize enough the ability to transform your pain into love via compassionate acts for others. All done with a silent nudging from your child. An inner peace is the flip side of kindness. None of us are going to be the next Mother Teresa, but we still have the ability to influence the “3 feet around us” – those whom we come in contact with.

I once heard the belief that the more you honor those who have passed the greater the likelihood that you will reach your fullest potential as you live out your life. Each bereaved parent has something to give back to society; stay re-engaged with life through actions that honor the child you have lost, let that become a driving influence. The world is a better place for what you have done, or will do, by occasionally, but consistently, acting in ways that reflect an on-going commitment to positive actions. Is this your whole life – of course not, but it becomes an important part of who you have become. My promise to “do some of the good Andy would have done” has been so instrumental in achieving a softening of my grief, allowing a re-engagement with life.

I am married (51 years) and the father of three boys, one of whom is deceased. My bereavement credentials include 15+ years assisting in a child-loss bereavement group, extensive research on grief and child loss, and the writing of a recently published (2019) memoir: Grief’s Ladder: A Son’s Death and a Father’s Healing Promise. My memoir evolved over two decades from journal entries (over 6000), extensive research, and invaluable generalized learning from my child-loss bereavement attendance. My professional background includes teaching and a 30-year career in advertising, marketing, and market research.