In 1963 it was the assassination of a president. In 1986 it was the explosion of the Space Shuttle witnessed by millions of children on TV. September 11, 2001 was the terrorist attack. By 2022, Covid-19 had killed more than a million Americans and millions of others throughout the world. In 2022 war broke out in Eastern Europe. Each of these shocking events thrust our children into the face of death in a sudden and graphic way.

As much as you can for a moment, I want you to imagine that you are a ten-year-old child: A president is dead, a teacher is one of seven who died in the Space Shuttle, more than 3,000 died in the twin towers. Worldwide, millions of people became infected with a virus with many dying. War is killing children your very same age. Many questions spring to your young mind: “Why did this happen?” “Why did these people have to die?” “Where are they now?” “What is death?” “How will their family members live without them?” “Could this happen to someone in my family?” “Am I safe?”

Questions like these are difficult enough for an adult to deal with, let alone a child. Many children under age 10 have not yet reached a cognitive level that would enable them to process information regarding death with adult-like logic.

In addition to cognitive limitations, an obstacle toward understanding death has to do with the following fact: For the past fifty years, most American children have grown up with few traumatic death experiences. It is a rare child today who has experienced the death one of their playmates or was allowed to be present at the deathbed scene of a dying relative in the home. Through no fault of their own, our children (and many of us as well) have grown up in a death-sanitized environment—until a horrendous event emerges. Death for most children of past generations has happened to bad guys on TV or to older people in a hospital. Now, again, for the current generation of young people, death has come to millions of people.

Each of these historical events has had the potential to afford a unique opportunity for parents and educators to begin a dialogue with children about death. Whenever we are interested in educating a child about any difficult issue, we as parents must be vigilant for something that is called a “teachable moment”, i.e., those moments which are provided by spontaneous occurrences of events that effectively set the stage for parent-child discussion. As a parent, you can use these events as a way to ask questions, clarify misconceptions, and reinforce beliefs about a variety of death-related issues.

A word of caution: Do not lecture. This is an excellent time to practice your best listening skills. As much as possible, let the child do most of the talking. This is what my friend Linda Wong-Garl did with her first and second-graders during the days following September 11th. “It was amazing” she said. “I sat with the kids, asked questions, and let them talk. It was magic.”

To repeat: close your mouth. This is your child’s time to freely discuss any areas of confusion. Do not criticize or engage in argumentative tussles. For elementary and preschool children, you may want to provide crayons and paper. If you feel compelled to suggest alternative explanations to what your child believes, do so gently. Next, paraphrase, i.e., summarize back to your child what he or she has just said. For example, you can respond to what your child has just said by saying, “So you’re saying that death to you seems like…”

To help get you started, here is a list of 10 examples that may stimulate a child’s discussion of death. To guide you, each idea listed below will be followed by a question that could be asked by a parent. Any one of the questions can serve as a catalyst for a discussion about death. 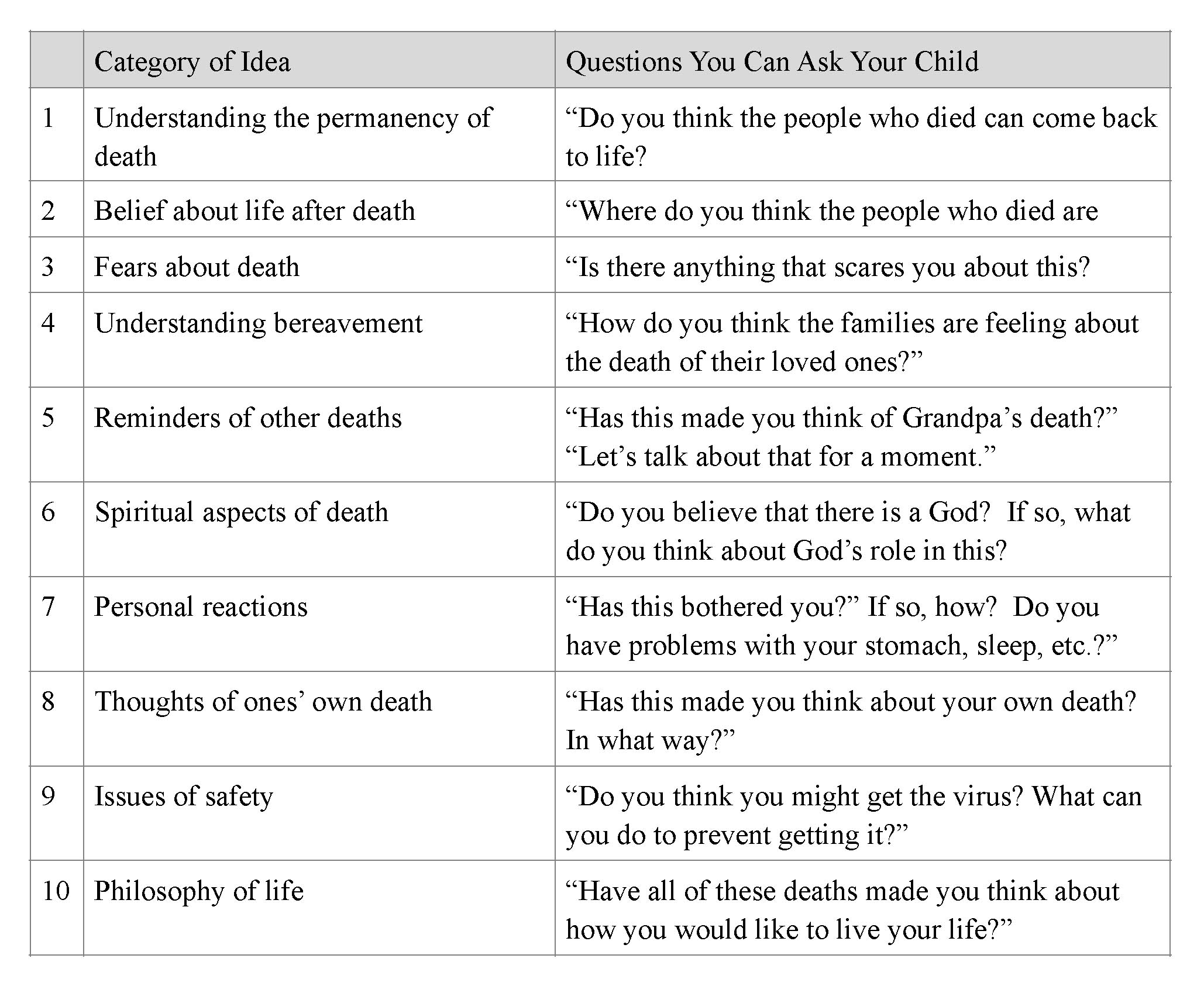 Be aware that some children will not respond well to these questions. Sometimes the “moment” isn’t right. Bringing up questions at another time (a day or two later) without being a “nag” may eventually produce an open discussion. You will find that even a few weeks after a good discussion, your child may have forgotten or misinterpreted part of the information. Recycling through notions of death and life issues is the way children learn. After you ask these questions, it may happen that your child becomes upset. As difficult as this may be to see, remember: your child will later be more upset if you try to hide the truth. Your main job is the be honest with your child.

Remember, there is never a “good” time to talk about death. As it is with sex, death is often a neglected area of parental responsibility or delegated to the one-shot “facts of life” lecture, usually much past the time it was needed. We tend to think of death when a tragic event hits us personally. As was the case with tragedies of the past, the appearance of this virus and war causing the death of so many provides us a rare opportunity to educate our children. This is a time when we as parents can use a significant and universally known catastrophe –one which for the majority of us fortunately does not carry the sting of personal tragedy – as a positive force to begin to fill the vacuum of death-related issues in the knowledge base of our children. In these uncertain times your child needs to be prepared for subsequent loss of life rather than be shielded from a painful truth. Don’t wait. Sit down this evening with your child and ask a question or two. Take the first step in giving a truthful gift that can last a lifetime—the gift of knowledge—however painful that knowledge may be.


*Thanks to Mel Erickson of GriefWorks, Auburn, Washington for her encouragement and editing suggestions.

Dr. Bob Baugher is a psychologist and certified death educator who teaches at Highline Community College in Des Moines, Washington. He is a twenty-year member of the advisory committee of the South King County Chapter of The Compassionate Friends. Bob has given more than 400 workshops, is a trainer for the Washington State Youth Suicide Prevention Program, and is co-author of A Guide for the Bereaved Survivor, A Guide to Understanding Guilt during Bereavement, Understanding Anger during Bereavement, Death Turns Allie’s Family Upside Down (a child’s book on death), Coping with Traumatic Death: Homicide, After Suicide: Coping with Traumatic Death.