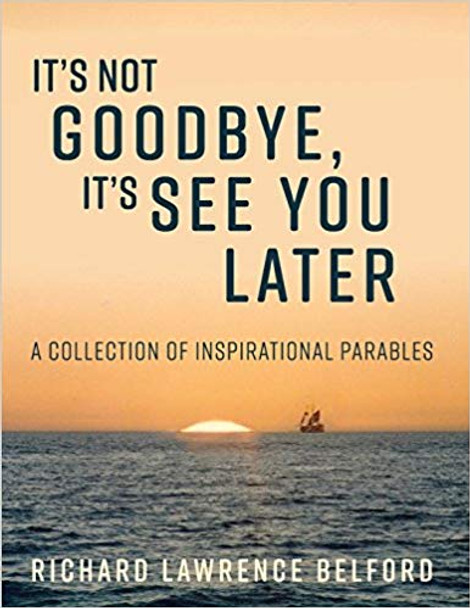 Richard Lawrence Belford is an inspirational writer whose twenty-year creative journey has not only allowed him to become well-published, but has also been fueled by his genuine desire to provide faith, comfort and hope to those in grief. His inspiring parables have been published in dozens of inspirational journals, magazines, periodicals and on numerous websites. A parable by definition is a symbolic short story that illustrates or teaches some truth, religious principle or moral lesson. Richard trusts this book's beautifully illustrated artwork, inspiring quotes and its collection of his inspirational parables, along with the stories behind their creation will help bring some small measure of solace to those grieving the loss of someone dear to their heart. Now, although "It's Not Goodbye, It's See You Later" is about loss, it's also about the lives, and the love shared by family & friends. As just one of billions of people who have lived, loved and experienced loss Richard strongly encourages you to read this book. He truly believes it will inspire you to always try and say, "I'll see you later, instead of goodbye." Richard has dedicated the book to the memory, and written its forward as a tribute to his father. He hopes it makes him proud

MSRP:
Now: $3.95
Was:
Saying Goodbye Buddy the duck talks to the children about death and grief. Buddy also explains funerals and things kids can do when they have different feelings. Includes drawing pages and a goodbye...

MSRP:
Now: $5.95
Was:
When Hello Means Goodbye: A guide for parents whose child dies before birth, at birth, or shortly after birth This sensitive booklet is a help to families during the early days of their grief. It...

MSRP:
Now: $17.99
Was:
The Goodbye Book From bestselling author Todd Parr, a poignant and reassuring story about loss.   Through the lens of a pet fish who has lost his companion, Todd Parr tells a moving and wholly...

Sometimes I Cry In the Shower

MSRP:
Now: $12.95
Was:
A Grieving Father's Journey to Wholeness and Healing As a grieving father, R. Glenn Kelly exposes the inner thoughts of a man who has lost the most precious of gifts; his child. Written with the...

MSRP:
Now: $85.00
Was:
This bag is filled with our Centering published resources for Bereaved Parents. 22 titles!!! Over $135 total value!! Includes: Love and Remembrance; I Remember, I Remember; Holiday Blues; Children...

MSRP:
Now: $15.00
Was:
My Grief Rights Wallet Cards These colorful wallet cards help grieving kids understand their feelings and empowers them to mourn in healthy ways. A compassionate gift for any bereaved children old...

MSRP:
Now: $15.95
Was:
Bearing the Unbearable: Love, Loss and the Heartbreaking Path of Grief Foreword INDIES Award-Winner — Gold Medal for Self-HelpWhen a loved one dies, the pain of loss can feel...

The Unspeakable Loss: How Do You Live After a Child Dies?

MSRP:
Now: $18.99
Was:
Support, Guidance, and Wisdom From Others Who Have Been There Charting the long path from the worst possible nightmare, shock, trauma, and overwhelming pain, to a life that once again miraculously...

Healing a Spouse's Grieving Heart: 100 Practical Ideas After Your Husband or Wife Dies

MSRP:
Now: $11.95
Was:
Healing a Spouse's Grieving Heart: 100 Practical Ideas After Your Husband or Wife Dies When your spouse dies, your loss is profound. Not only have you lost the companionship of someone you deeply...

MSRP:
Now: $15.99
Was:
Healing After Loss Daily Meditations for Working Through Grief A dated meditation for each day of the year. Strength and comfort can be found in these inspirational words. Daily meditations follow...

Sibling Grief: Healing After the Death of a Sister or Brother